Barēa Regal beat Caja Laboral in a close final to the Spanish Super Cup with a spectacular last five minutes and another dominant performance from Navarro. This was Barēa’s third consecutive Spanish Super Cup. 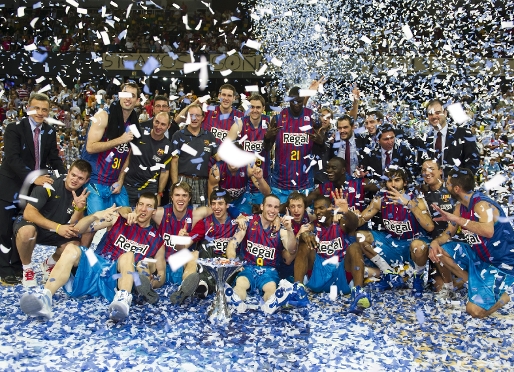 Referees: Pérez Pizarro, Conde and Jiménez
It was an intense Super Cup final, which wasn’t really settled until the final quarter – indeed until the final five minutes of the game, when Navarro – supported ably by Huertas, Ndong and Eidson – stepped up to the mark.

The strategies that the two teams had decided on was clear from the start, with Caja Laboral taking advantage of some defensive errors, as Oleson (the star of the semifinal) and Teletovic scored two three pointers to open up a gap, before Navarro and
Boniface Ndong led the which took Barēa in 20-25 up at the end of the first quarter.

Things stayed more or less the same in the second quarter, Barēa coming back from five points down to leave the scores at 40-38 with six seconds left, before a foul given against the Barēa bench for complaining about an Ndong foul allowed Caja Laboral to stretch their lead to 42-38 at the break, though they could have stretched their lead further had Ndong not blocked a Mirko Bjelica right on the stroke of half time.

The third quarter was even tighter with Ndong again excelling to block a couple of efforts from the NBA player Seraphin and the teams finishing on 59-58 with everything still to play for and the tension mounting.

Both teams upped the pace for the final ten minutes and the veteran Pablo Prigioni took control of the game to help set up a 65-58 advantage with seven minutes left to play.
However, now was the moment for Navarro to stand tall and with two consecutive three pointers he helped turn not just the scores round -65-71 with just under 5 minutes left – but also the feel of the game as Regal chalked up 13 points without reply to take a commanding lead.

Caja Laboral’s heads began to drop and Huertas, Ndong and especially Navarro went in for the kill and ensured Regal wont eth Super Cup with a clear 73-82 margin.