Pascual: "Ambition will show us the way"

Pascual: "Ambition will show us the way"

Regal Barça coach Xavi Pascual is preparing the fourth season at the helm of the basketball team. Well into the preseason, the manager is sending out an encouraging message, because the challenges are very attractive.

It’s the start of the fourth season for Xavi Pascual as Regal Barça coach. Is it hard to get going?
"Getting started is pretty easy…it depends on the illusion that you have, and we have plenty of that. What’s difficult is the situation you may have, depending on the number of international players available. But illusion is what shows you the way. Right now, getting back to winning again after all we’ve won is increasingly difficult. There are new challenges. However, we start from a position of winning several tournaments and this makes it all more exciting". 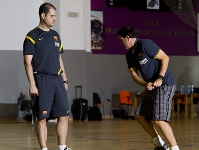 What are the challenges for this season?
"We always look to win the first title of the season. We need to excite our fans so they come to the Palau to watch us, even if the game is being televised. We go into every competition trying to win, knowing the difficulties involved".

The preseason squad, as usual, is reduced. With regard to the new signings you are already working with, how are they?
"At the moment we’re happy with the five seniors. The two new guys, Chuck Eidson and Xavi Rabaseda, are coming on very well. Rabaseda knows part of our organisation. Only last year he wasn’t with the club and he’s adapted quickly. We’re also pretty happy about Eidson’s adaptation. We’re also really pleased with the eight young players at Encamp, who are keen to improve. In short, we’re very pleased with what we’re working with so far". 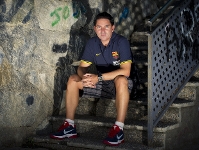 What are the guidelines to be followed during the stage?
"We have different goals. The team has to grow as such, picking up our future game tactics. We’re also seeking to improve the individual qualities, and the fine tuning of the seniors, in parallel with the young players taking a step forward, so that in the future they might play in the first team. As well as that, we’re looking to improve the individual technique and tactics of the lads, and this improvement is going really well".

Are you following the International players? How do you think they’re doing?
"Marcelinho Huertas, with Brazil, is playing really well, and having a very good championship. Now comes the second phase, the so-called moment of truth, and we’ll wait and see how it goes. I try to watch all our players, watching Serbia, Slovenia, and Spain, and everything coming from Australia, to have them all under control”.

Are you keen to get to work with the whole team?
"We’ll take it step by step. We know the situation we’re in. First, Marcelinho Huertas and Joe Ingles will finish on the 11th, and taking into account the return trip, they should be here around the 15th or 16th. The rest will depend on how far they get in the European Championship. We know that it’s always the case. This year is the trickiest since I’ve been here because we only have five first team players to work with. This factor, and the integration of the new players, means that we are a little behind in the preparation, but the road is long and I'm sure we'll make up for lost time with hard work".