Regal Barça began their defence of their Euroleague title with a clear win at the Palau against Cibona. Xavi Pascual’s men were brilliant in defence in the first two quarters against a disappointing Croat team.

Barça kept Cibona down to just 20 points in the first two quarters with an intensive display in defence and with Navarro and Ricky both notching up 14 points, it proved to be a fairly comfortable win. 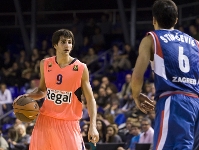 Regal, who wore their change strip for the game, came out looking like champions, but the visitors made a quick start and well led by Stipcevic they showed good interior movement and three minutes before the end of the first quarter, the scores were still at six all - unusual for two such attacking teams.

Ricky with a three pointer and a typical Morris assist then upped the pace and Cibona tried to react before a couple of good actions from Lorbek left it at 17-12 after the first 10 minutes.

Cibona’s Rozic, who missed the game with a calf injury, seemed more of a loss for the visitors than Mickeal and Basile for Barça and with the greater depth on the bench that the hosts could boast and the contribution of Lorbek and Lakovic opened up a 22-12 lead. 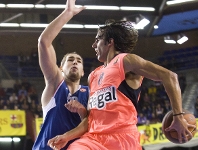 Scores from Navarro and a 2+1 from Ricky, together with solid defending that kept out the Cibona attackers began to stretch the lead definitively and at the break the visitors had only managed a point a minute and Barça went in 35-20 in the lead.

Both teams failed to score with their first two attacks in the third quarter and the tonic of the first half looked set to continue as Barça’s granite like defence ground down any attacking options their opponents attempted.

Morris made a fantastic block which raised applause around the Palau as well as desperation on the visitors’ bench and when Vazquez put away an ally hoop and Ricky and Navarro also scored, Barça were 49-24 up and cruising.

Cibona were onto damage limitation now and with Stipcevic fading, only Bogdanovic (28 points) was able to offer any resistance and a few moments of relaxation allowed him to pull his team back to 56-41 at the end of the third quarter, during which they scored more points than in both the first two quarters together.

A three pointer from Lorbek opened the last quarter as Barça stepped on the accelerator again and the crowd began to enjoy the show as the team again stretched their lead beyond 20 points. As Xavi Pascual gave his bench a chance to get in some game time –giving youngster Aparicio his debut, Cibona pulled back a little, but the European Champions never looked likely to start their defence with anything but a win. 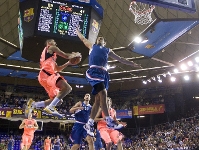