"An historic triumph and a festival of basketball"

"An historic triumph and a festival of basketball"

Xavi Pascual could not hide his delight after seeing his Regal Barça side defeat NBA champions Los Angeles Lakers on Thursday evening and praised the efforts of both teams to make it a night to remember.

The Blaugrana coach had good reason after the Catalan outfit overcame one of the world's best teams to record a stunning pre-season win. "It is an historic triumph yes, but more than that the result was not the most important thing," he explained. "What was most important was that we saw a festival of basketball, with both teams contributing and the fans have enjoyed it."

Reflecting on the game he continued: "The team reacted when they lost out in the third quarter. It was very even, but in the end we won the game and that is very is very satisfying. The Lakers are not yet at their best level and we still have to improve. Here we played below the level that we have been doing in pre-season, but that could be down to the opposition and the event."

Below are comments from Barça's stars 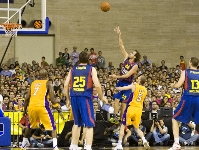 "Pau? It was great to have him here and everyone wanted to see him. He had the capability to improve every day until now, so we believe, he has become the best interior player in the NBA."

"Ricky (Rubio) did not have his best day, but he has to have games like this to continue improving. He had three fouls and did not want to be responsible for a fourth at the start of the second half and did not start the third quarter."

"Phil Jackson (LA Lakers coach) is partly right. Here we were weak in some positions, but if we played in their league we would have done things differently."

"It does not worry me what Artest or Kobe say, they do not play in the ACB or the Euroleague. If they ask 'Pete who?, then fine. I will not be playing against them again."

"I do not know how it was said, but what is important is what happens on court. I do not know what my statistics are compared to his."

"The team was not at its best and if we had lost we would not have used that as an excuse."

"It was not as great as we thought, quite tough in fact, and we took advantage of the fact that they are not yet at their best. But they took it seriously."

"Now we have to refocus and prepare for the ACB, that is what is most important."

"We would win games in the NBA, of course. We proved that without even playing at our best."

"We could not play at our rhythm as they wanted to play a slow game."

"It was clear that (Kobe) Bryant lacked his speed and things did not go well for him."

"We have to be professional and from tomorrow onwards think about Granada." 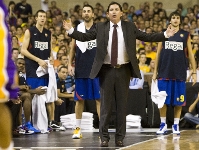