Pupils from the YMCA and La Salle Grŕcia school have taken part in a session run by Lakers and Barça veterans. The children shared the court with Gasol, Bryant, Epi, Solozábal and others.

On occasion of the Lakers’ visit to Barcelona, the ‘NBA Cares’ programme was translated to “l’NBA es preocupa”, and a clinic was held with Barcelona schoolchildren. After Phil Jackson’s squad trained at the Palau Sant Jordi, children from the YMCA and La Salle Grŕcia school joined the Lakers to get some expert coaching.

Gasol and Bryant with the children 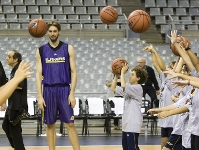 Pau Gasol presented his Lakers colleagues to the participants, who included Kobe Bryant, who did not take part in the training session. He seemed to thoroughly enjoy the experience, although it was naturally Gasol who attracted the most attention, and who gazed upon by adoring fans. 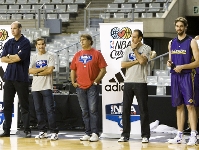 Four former Barça players also joined the clinic. Juan Antonio San Epifanio ‘Epi’, Nacho Solozábal, Manolo Flores and Ferran Martínez joined a group of four each and were able to appreciate what NBA players are like at first hand.

“These events show that all NBA players are top professionals. The players like taking part and put their hearts into it”, explained Nacho Solozábal, who has been working with Kobe Bryant. “He is a living legend. To have them here adds a new dimension to basketball, not just because they are such good players but because they are such great guys too”. 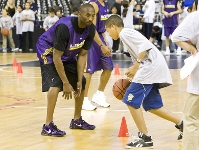 The veterans all feel that Regal Barça can match the Lakers in Thursday’s game at the Sant Jordi. “The Lakers have only been training for three days, so they’re not at top level yet. I think if Regal Barça play well, they have a chance. If they put up a fight, it’ll be an interesting match.”