Los Angeles Lakers’ players have not arrived in Barcelona to take it easy and will look to compete with and beat Regal Barça when the two teams meet in the Palau Blaugrana, their stars have assured.

The NBA champions landed in the Ciutat Contal after playing the first game of their European pre-season tour in London and immediately declared that they were in town to win.

In front of the media throng the Lakers’ head coach Phil Jackson explained that he felt the encounter with the Barça would be a great one. “We intend to move the ball around very quickly,” he explained. “We want to find our match rhythm and look to use the sides.”

“We are not completely ready and we are not yet playing at our best,” the coach continued. “We are not in prime condition and we intend to ensure that all our players are given some game time here. That is what pre-season games are all about.” 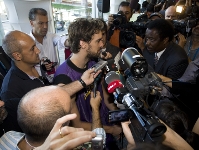 Pau Gasol is set to play against his former club but will not be doing the Blaugrana any favours. “The NBA teams, like teams from any of the world’s best leagues, always want to show their superiority,” he said. “But I think that it will be an attractive, hard-fought game without incident.”

Just as he told Barça TV earlier in the week Gasol added: “Regal Barça have a great team and they are ahead of us in their preparations for the season, but that will not be used as an excuse,” he added. 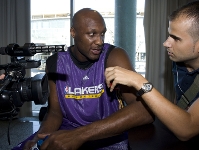 Lamar Odom has been impressed by what he has seen in Barcelona already, but hopes to one day have a closer look. “It is the first time that I have been here and I hope to be able to return and to know the city better,” he explained. “Pau has told us a bit about Barcelona. He has not said anything about the game though, but we are expecting a competitive encounter with both teams going out to win. It is important that we enjoy it and play well. It will be fun.”

Ron Artest also highlighted Gasol’s enthusiasm for the Ciutat Contal. “I do not know much about Barça, but Pau does. He often talks about them and says they have a good team,” he said. Derek Fisher added: “We have a responsibility as NBA champions, but it is exciting to be here.” 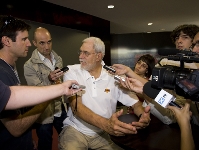 The Media Open Day at Camp Nou has attracted no less than 130 journalists from 60 different outlets as reporters came from countries ranging from Italy to Brazil and Mexico to France. In what turned out to be an intense afternoon LA Lakers coach Phil Jackson lightened the mood when he commented: “The only thing missing was a band to greet us.”

Ron Artest was keen to test his Spanish as he explained. “I can say a few things like ‘arroz con pollo’.” Pau Gasol was then asked a large number of questions and he confirmed that is not on Twitter, but does have a Facebook account.