Xavi Pascual: “We have to be very satisfied with this season”

Xavi Pascual couldn’t hide his satisfaction after the team had won the title in Bilbao. The Regal Barça coach reckoned the team: “responded well”, not just in the game, but also throughout the season. 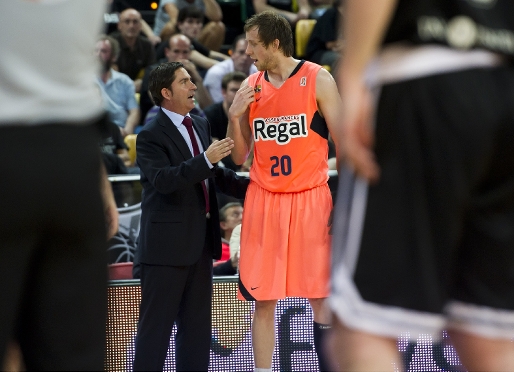 Four titles won out of a possible five is more than enough reason to be happy with the team’s season. Regal Barça won the ACB title n Bilbao and the coach reckoned his team: “had been fantastic in a very difficult game. I’ve got a lot of good memories from the season, which has been tough. We are very happy, we’ve worked hard and I think once more we have come into the play offs in excellent form”.

Pascual has now won nine titles as coach at the Club, but reckons this one was something special: “for me, this is the most important title of my career. We’ve had a lot of injury difficulties and that has helped to make it special”.

“This is the reward for many months of hard work. I would have liked to be able to celebrate it with my family, on my birthday, but this is a great present”.

“It’s not easy to win six league titles. I hope we will win plenty and that doesn’t stop here, but the important thing is to help the team and continue to win titles”.

“It’s been a tough year, but here we are. It’s been hard for us all with the injuries, but we’ve worked hard and got our reward. It’s never easy to win and each season is different. Last year everything slipped into place, but it’s been more difficult this season, though we’ve still managed to win four titles. We have to be satisfied with that”.