Regal Barńa got off to a winning start against Bilbao Basket in the ACB final series. Lorbek (the top scorer with 24 points and 28 evaluation) and Perovic were especially outstanding. 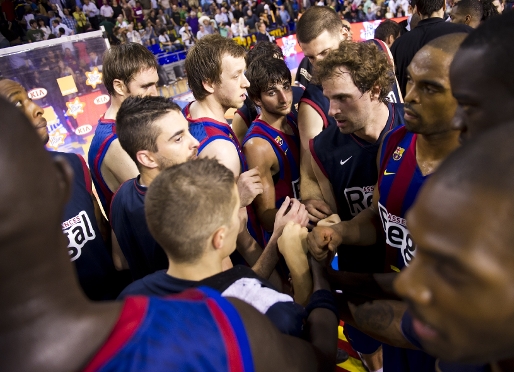 Venue: Palau Blaugrana. 6,821 spectators.
The Palau Blaugrana was decked out as it always is for the big occasions for the opening game of the ACB final series. And the team responded to the amazing support with a convincing win against Bilbao Basket who had to face Barńa at their very best. Xavi Pascual’s side, after a great first period, were in command at the break and it never really looked like they weren’t going to get a thoroughly deserved victory. 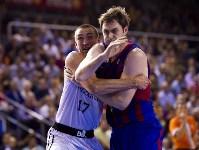 Some had said the pressure might get to Regal Barńa against an opponent with nothing to lose, but tonight their experience of such occasions showed. They came out to get the job done quick, and in the first period were simply impeccable. Perovic never stopped working and Lorbek could do nothing wrong (11 points in the first period, and one hundred per cent 3-pointer rate), and they were amazing in defence as they flew into an early lead (10-2).

The second half brought more of the same and a Lorbek three stretched the lead further. As the defence continued to excel, the Slovenian was simply outstanding and Perovic was collecting offensive rebounds left, right and centre to create even further options for his team, who as good as won the match with a 14-2 streak. 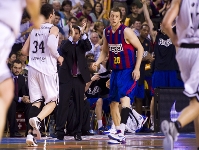 Barńa were making it all look too easy as they stretched their lead to twenty (57-33). With ten minutes to go, the visitors already seemed to have their minds on game two, while Regal Barńa never looked like showing any intention of easing off.

Xavi Pascual rotated his bench, but the intensity held. He wanted to intimidate Bilbao Basket, who looked totally stunned as they fell to 26 down (62-36). Only an injury to Ingles, who twisted his left ankle, was a cause for concern as the home side dominated the third period.

Relaxation towards the end

The last ten minutes weren’t really needed. Regal Barńa started relaxing and Katsikaris brought off his most important players for some rest.
Strangely, this led to his side reducing the deficit, secondary players like Paco Vßzquez helped narrow the gap to just twelve points (70-58), which totally changed the feel of things.

But there was no cause for alarm. Lorbek went back out to continue scoring and Ricky and Ndong made their own contributions. The Palau could breathe again and although the game ended with only ten points in it, that in no way reflects the absolute dominance of the Catalans in the first game of the final series.