Regal Barēa lost at Madrid in overtime following a vibrant and intense match, but they still top the ACB League thanks to their better basket average. 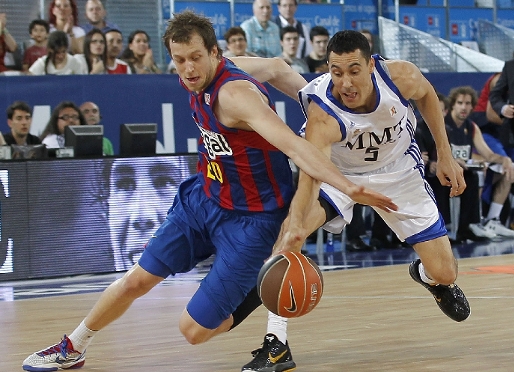 Referees: Pérez Pizarro, Garcķa Gonzįlez and Martķnez Dķez
The League’s big two came together in a real clash of titans this evening in a game that saw plenty of excitement and great basketball, as well as errors from both sides. Unfortunately, Regal Barēa were unable to get the final scores to take the game, but they fought all the way, right down to the overtime period.

The defeat leaves Madrid level on points with Regal, but Barēa’s 20 point win at the Palau(95-75) earlier in the season means that they hold onto top spot with a superior basket average. 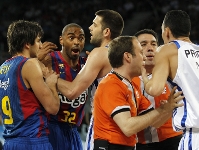 With Madrid desperate to show their recent improvements were based on a solid foundation and with Barēa keen to put an end to their recent bad run of results, it was a nervous first half from both teams.

Madrid took the first lead, but after Carlos Suįrez and Alan Anderson clashed following a three pointer from the Madrid man on four minutes, Pascual made a triple change and brought on Lakovic, Grimau and Vįzquez for Ingles, Anderson and Perovic and the game turned Barēa’s way as they chalked up 11 points without reply to draw level at 15-15 following a great three pointer from an especially inspired Grimau.

However, Barēa’s fightback was stalled by a couple of mistakes in attack and Madrid finished the first quarter 22-19 ahead.

Tomic, Mirotic and Velickovic helped Madrid to a seven point score without any Barēa reply before Lakovic helped the visitors get five points back without reply and the teams went in 34-29 at the break.

Captain Roger Grimau led the team’s more active start to the second half, but Madrid held onto their lead and managed to open up a more important seven point gap(46-39) after a series of free throws.

Up stepped Joe Ingles, solid in defence and with a cool head, to score three three pointers in the final quarter and make the home team nervous, but two quick baskets from Tomas were enough to force overtime, as Fran Vazquez missed the final throw of the 40 minutes.

Alan Anderson was Barēa’s star in the extra minutes, with five consecutive points bringing some much needed calm to the team and a lead that they held until the final moments. What looked to be a clear personal foul on Ingles went unseen by the refs and Suįrez and Prigioni took advantage with their free shots to give Madrid a narrow win.