Xavi Pascual could not hide his contentment after picking up his second consecutive Spanish Cup. "Everything went perfectly" he said after the final. 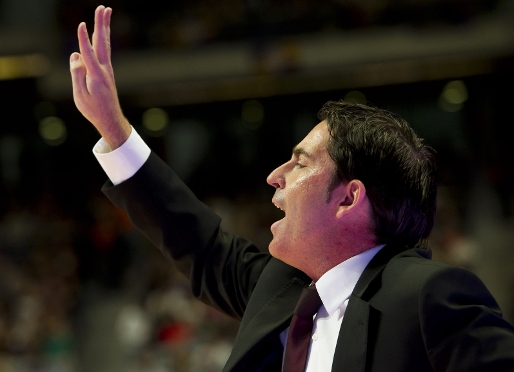 Ricky: "With one leg or not, I had to help the team

Ricky Rubio was also a key protagonist in the final. At the end of the third quarter, the base has had to come off due to an ankle injury and was treated on the bench. It seemed that he wouldn’t be able to return, but Ricky came back on court when there were only a few seconds left. "It's what the team needed. Víctor [Sada] had a great match, but also got hit at the end and I had to help out the team, with one leg or not. Now I don’t want to think about the ankle."

The point guard is well satisfied with his third Cup, his second with Barca, and acknowledged that the team has made mistakes with a few easy shots in the first half, but made no errors in the second. "This competition is really good and it's incredible to win it. You don’t win a trophy every day," he said.
"It’s very intense for we coaches, but it was worth it. I hope to win more trophies," said Xavi Pascual after toppling Madrid 68-60. The Regal Barça coach acknowledged that "everything went perfectly," despite the first half equality. "In these games every detail is important and my team was able to adapt to the required level of contact the game demanded. We are very happy," he insisted.

Pascual also had a message for the injured players who were unable to participate in the Cup, Basile and Mickeal: "I’d like to remember those who are here but weren’t able to play. It's been a tough year with many injuries. They seemed impossible to stop, but the Club has made a great effort and we are in good shape at this point in the season”,

The coach was very complimentary about how the teams responded to the brutal marking of Navarro: "We had to take advantage of the space allowed us due to the double marking of Navarro, who was a bit tired today. I think we did it really well."

Below are some of the post match comments from the players:

"I have five winners medals, which is the most important thing. Today they defended me very well and what matters is that if one of us is not quite right, the rest do the job."

"In the second half we were better than them, and we defended much better and in attack we were also the better team"

"This team has no limits and we all put in a lot of work. Despite the injuries, we’re having a great season."

"We are a pretty special group."

"Winning the Cup sets un in good stead for the League and the Euroleague."

"I am really happy with the result."

"We scored 2 or 3 three-pointers that set us on the right track and we kept up a tough defense that allowed us to win the game."

"Anderson had a great match, but both in the quarters and semi-final we had great team wins."

"If you stop to think, what’s happening is pretty heavy We’re really enjoying it at the moment."

"It was a very intense good game in Madrid ... We've made a bit of history."

"I'm content because I had a pretty good game [20 rating], but we’re all here to help the team win."

"We are very happy and now’s not really the time to say anything. The Cup here says it all."

"We are all very happy, after a tough game and a very difficult first half, and what’s more, playing in Madrid."

"Tomic is a good player and, indeed, all of Madrid's tall players are very good."

"We played really well from the start, but it has not been an easy win."

"I’ll be keeping the nets as they are pretty special ."

"In the second half we defended a lot better."

"This team is perfect."