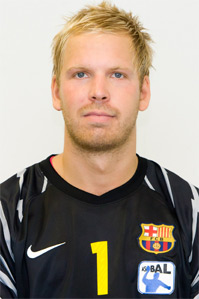 Swedish international keeper Johan Sj—strand is one of his countys most promising players and he signed for Barca in order to continue to improve as a professional.

Johan Sj—strand began as a youngster with HK Country before signing for IFK Sk—vde when he was just 15. A year later he made his debut in the Swedish league and in June 2009 he signed a three year contract with the German team Flensburg Handewitt, where he stayed for just one season before signing for FC Barcelona Borges in July 2010.

One metre ninety five tall and weighing in at 93 kilos, Sj—strand combines bulk with a good reading of the game. He has very quick reactions and good anticipation as well as an explosive character and boasts fast movement and a great stopping ability with his legs. He is very similar to one of his predecessors between the sticks -Tomas Svensson.

Gold medal winner at the 2007World Junior Championships in Macedonia