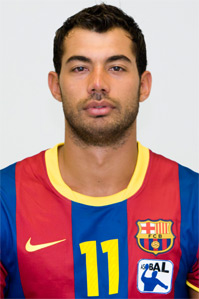 Sarmiento is another of the young talents in Spanish handball. He is a born middle back who is used to playing in both the Asobal League and in Europe. His game has really taken off in recent seasons.

Just before turning 18, Sarmiento joined his local side Galdar in the Canary Islands where he learnt the game as an Úlite player from 2000 to 2003. He then moved up into the Asobal League when he signed for Keymare AlmerÝa for four seasons. His improvement as a player meant that in 2007 he was signed by Ademar Leˇn. He stayed there until the end of the 2008/09 season when Barša moved in for him.

Sarmiento has played for Spain’s junior side 15 times. In March 2009 he was called up for the full national squad by coach Valero Ribera for the first time.

In spite of his apparently reserved character, Dani Sarmiento is a great fighter and winner. His ability to infect his teammates with his enthusiasm, skill and excellent play brings the side together. As a middle back his outstanding qualities include the ability to direct the game and his speed and effectiveness in one-on-ones with superb penetration and a powerful throw. He does not normally defend but when he does he offers counterattacking options and excellent vision of the game.