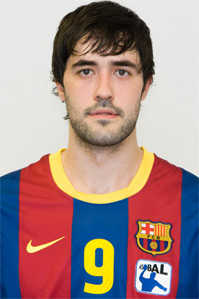 Entrerríos is a consolidated international and one of the finest players in the country. After playing for two of the biggest clubs in the Asobal, Ademar and Valladolid, the Asturian centre back has joined FC Barcelona.

Raúl started out in the youth ranks of Grupo Astur, and went on to represent two of the Liga Asobal giants. He made his professional debut in 2001 for Ademar León, where he played for six seasons and won one Copa del Rey (2001/02) and a Cup Winners Cup (2004/05). In June 2007 he switched to Valladolid, where he played for three seasons and won yet another Cup Winners Cup. In the 2010/11 season, Entrerríos signed for FC Barcelona Borges, where his older brother Alberto already played in 2001/02.

He has 113 international caps and was in the World Cup winning team in Tunisia, and also got a silver medal at the European Championship of 2006 and bronze in 2008 and also won bronze at the Beijing Olympics.

Entrerríos is a team player, a natural leader and highly versatile. He usually plays as a centre back but can play anywhere on the first line if called upon. He is strong in the one on one and connects well with the central playmaker. He combines solidity in defence and attack and is noted for being a very hard worker that always fights until the end.