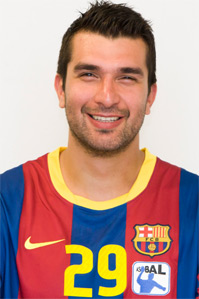 Marco Oneto has enjoyed an enviable career as a player. The Chilean became one of the most effective players in the Asobal Handball League thanks to his skill from the six-metre line.

At the end of this season, Marco Antonio Oneto went to Alicante, where he played for Costa Blanca ‘B’. A year later he began playing at the top level for Cangas, and he stayed at the Galician side for three seasons (2002-2005). He then played for Bidasoa for two seasons, but in the second season he was unable to prevent the Basque side from being relegated from the top flight. From there, he moved to Naturhouse La Rioja, his last side before coming to FC Barcelona Borges in January 2009, at the start of the second half of the season.

Oneto has also played in 23 internationals for Chile, as well as 13 games for junior national team.

Marco Oneto is a player of great talent. His height and weight make him unstoppable. He is also a great defender as well as a great attacker. His height will help FC Barcelona Borges to play high balls in attack. The Chilean is also very effective in one-on-one situations, and he is a key player in central defence.