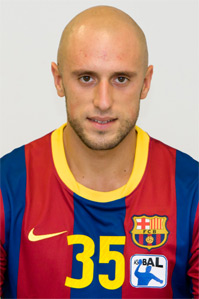 Konstantin Igropulo was born in Stavropol, Russia, on April 14, 1985 and is now considered to be one of the best players at shooting with his left hand in the world.

The lofty star began his professional career with Panellinios in Greece, where his family originiate from. After two seasons (2003-05) he moved on to sign for Chehovskie Medvedi, one of the biggest teams in Russia and enjoyed four fruitful syears there (2005-09). After proving himself at club and European level, Igropulo joined FC Barcelona at the start of the 2009-10 season.

A regular for the Russian national team, he has stood out playing under coach Valeri Maximov, whoe was also his trainer at Chehovskie. In the Olympic Games in Beijing, where Russia came sixth, Igropulo was teh eighth highest goalscorer in the tournament with 36 goals.

Being able to play in several positions is one of Igropulo's main assets, while he is seen as a strong player with a powerful throw. The 24-year-old is also a great tactician and he likes to test opposition defence by using the flanks. The Russian star is as strong going forward as he is at the back and has knows where the goal is.