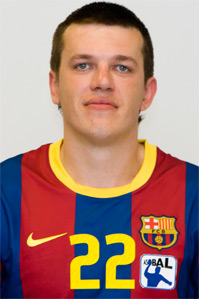 Siarhei Rutenka is one of the biggest names in the handball world. This first line player guarantees quality and versatility, as shown by the number of international titles he has won.

Born in Minsk (Belarus) 27 years ago, Rutenka started playing professional handball for Arkatron Minsk, where he spent two seasons (1998-2000). Aged just 19 years he moved on to Slovenian club Gorenje, where he spent just one year before being signed by the biggest club in the country, Celje.

He spent four years with the Slovenian outfit, and it was here that he really started making a name for himself. With Celje he won his first European Cup (2004), a success he shared with Dejan Peric, who would later play for Barcelona. He was the highest scorer in the competition, an individual accolade he repeated the year after (2004/05), scoring more than Barça’s Iker Romero, who was second. That season Rutenka played in the semi finals against FC Barcelona when the Slovenes lost at the Palau by 5 goals, Barça therefore making up for the three goal deficit they brought back from Celje.

His amazing goalscoring ability was also displayed in the European Super Cup of 2004/05. He topped the scoring and was also named the best player. Following all these huge successes, in the 2005/2006 season, he came to the Liga Asobal, joining Ciudad Real. He enjoyed plenty more success in la Mancha, including three Leagues and three European Cups, and was opne of the star players in the finest period in the club’s history.

Rutenka has played internationally for both Belarus and Slovenia, and has appeared in major tournaments with both. Though he has never won a major international title, he was the top scorer at the European Championships played in Switzerland in 2006.

Rutenka’s winning spirit and commitment on the court have typified his game. His natural role is at left back or in the centre, but in his time at Ciudad Real he has displayed his versatility and willingness to make sacrifices, last season slotting into the pivotal role and doing so excellently. He is a fearful player in attack, and is always among the highest scorers in any competition. He has an especially powerful throw, renowned for being one of the best in the world. Rutenka is most definitely the kind of player that makes a huge difference to any team he plays in.