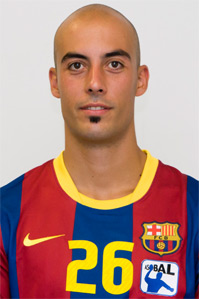 Albert Rocas is one of the stars of the Catalan handball scene. From Palafrugell, and aged 25 years, he is one of the best right-sided players in Europe. He is still young but is a valuable component both of any club and his national team.

Rocas was introduced to the game by his brother, who never made the grade as a pro. He excelled for his school team in Palafrugell and was snapped up by Granollers at the tender age of 15. He rose up through the ranks and moved west to Valladolid when he turned 18 and made his debut in the Asobal League in the 2000-01 season. After three seasons (2000-2003), he moved to Portland, where he played for four seasons (2003-2007), and won one Asobal League, one Cup Winners Cup, one Super Cup and one Asobal Cup. Rocas has twice appeared in the Asobal League Ideal VII.

He is the perfect wide player, quick, accurate and a specialist from 7 metres. He has a wide repertoire of throws. The infinite list of adjectives you could describe him with includes fast, decisive, effective, aggressive, skilful and dependable.