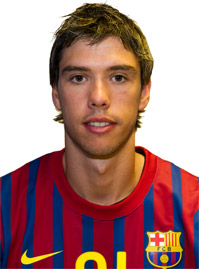 Mikel Aguirrezabalaga is back at FC Barcelona where he played for two years as a youth. The Basque full back, after a few seasons at Ademar, is hoping to win plenty of titles with Barēa Intersport.

Born in Zarautz, he started playing handball at school, as well as soccer and basketball. His father, and his younger brothers, David and Alberto, also play handball.

After learning the game at his local club CD Amenįbar, in Zarautz, Mikel was brought to FC Barcelona by Valero Rivera in the 2002/03 season at the age of just sixteen, but rather than a youth team he was actually intended as a B team player, while also contributing sporadically to Rivera’s first team. But an unfortunate injury to cruciate knee ligaments halted his progress, and he was sidelined for a long, long time. He returned to help the B team, coached by Toni Gerona, to promotion in La Coruńa in the 2003/04 season, where he and Vķctor Tomąs formed a formidable duo.

In the 2004/05 season, he went on loan for three years to Alcobendas trained by Rafa Guijosa, and where he played alongside goalkeeper Daniel Saric. In 2007/08 he finally made the leap into the Liga Asobal when he was signed by Ademar Leon. Under Jordi Ribera, Mikel improved as a player and is now considered mature enough to return to FC Barcelona. With Ademar, he won one Copa Asobal, and that was at the Palau Blaugrana against Barēa.

Internationally, Mikel has 15 caps for Spain and played in the European Championships in Austria in 2010.

Measuring 1.94 metres and weighing 91 kg, Mikel is a top quality handball player with all the right physical qualities for the job. He has a huge jump and powerful throw, meaning he is a veritable cannon from 9 metres. He can also play at centre back and is an excellent team player.