Barça Borges won two trophies before the league season got underway: the Pyrenean League and the Asobal Super Cup. What better way to introduce the new signings!

The first serious test ahead of the new season was the Pyrenean League, held in Castelldefels, just down the coast from Barcelona. Barca dismissed Saint Raphael 31-23 in the semi-finals and had a similarly comfortable ride against Nimes in the final 37-28. Daniel Saric produced a fine performance.

Yet again the Asobal Super Cup brought Barca Borges up against Ciudad Real, this time in Guadalajara. Barca won the contest (26-33) for the second season running, producing an excellent all-round performance that gave Ciudad Real no options whatsoever. It was the 14th Super Cup trophy in the Club’s history. Saric was once again outstanding.

The new Barca keeper was named man-of-the-competition – a repetition of the award in the Pyrenean League – and another new signing, Siarhei Rutenka, was named player of the Super up with 7 goals. 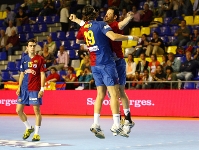