Barca Borges took part in the first Final Four of the Champions League in Cologne. Victory came within touching distance but Kiel, with the home advantage, snatched a win.

The Champions League featured a new format for the 2009-10 season. After the group phase, the R16 and the quarterfinals, the remaining four teams played out the first handball Final Four in Cologne. Barca Borges lived up to their superb European record and made it through to the final.

First win in the Sparkassen Arena 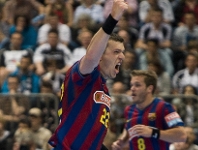 In the group phase, Barca crossed swords once again with Kiel. It was honours even as Kiel took the points in the Palau (27-30) while Barca got their revenge in the Sparkassen Arena (30-32), the first ever Barca win in Kiel. A draw away to la Kolding (22-22) prevented Barca from finishing in first place but meant that they avoided the winner of another group.

Top opposition in R16 and quarterfinals

In the R16, Barca Borges were drawn against Zagreb, a team with a great tradition in the European Cup. Barca came out on top in both games and went on to repeat the double against Hungarian opposition, Veszprem.

Kiel take it in the final minutes 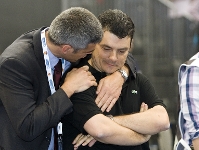 In the Final Four, Barca Borges faced Txekhvoskie Medvedi in the semis. The Russians were an unknown quantity for Pascual’s men but in the event they swept to a comfortable 27-34 victory.

Meanwhile, Kiel got the better of Ciudad Real in the other semi-final. Barca produced a disciplined performance in the final and dominated for much of the game, with Barrufet in outstanding form. However, in the last ten minutes the German crowd got behind Kiel, who fought back to win 36-34. Barca had done everything to win the crown but it just wasn’t to be. 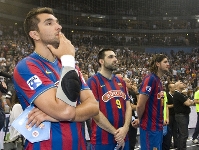