Four trophies and a Final Four

Four trophies and a Final Four

Barça Borges ended the season with four more trophies – the Kings Cup, the Asobal Cup, the Super Cup and the Pyrenean league. Only the two defeats against Ciudad Real in the league and the Final Four against Kiel stopped them from sweeping the board.

Barça started the season well by collecting the Pyrenean league and the Super Cup with new signings. Rutenka, Sarmiento, Igropulo and Saric featuring in a new-look Barça Borges. The Super Cup, held in Guadalajara, resulted in a comfortable win (26-33).

The Asobal league began with a crushing win a way to Teucro (17-32) but a defeat against Ciudad Real in the Palau (30-33) in the fourth round dented Barça’s ambitions. However, the 29-36 defeat of local rivals Granollers put the team back on the right track.

The Champions League got underway in October with a 27-39 win away to Amicitia Zurich. Meanwhile, in the league, Barça Borges recorded the biggest win of Asobal league season at home to Cuenca (42-25). However, a win for Kiel in the Palau (27-30) handed the Germans first place in the group. This defeat was followed by a draw against Ademar in the league (26-26) that left Pascual’s men three points adrift of Ciudad Real.

Wins against San Antonio and Valladolid boosted the team’s confidence together with a crushing victory against Torrevieja (33 - 13). Barça Borges ended the first half of the season unbeaten away from home and second in the table.

2009 came to a happy end in Cordoba with victory in the Asobal Cup, the third trophy of the season. After dismissing San Antonio in the semi-finals, Barça Borges won by a goal in extra time (34-33) after a great stop by David Barrufet.

After a break for the European Championship in Austria, Barça faced vital Asobal league and European games in February. David Barrufet’s announcement that he would be retiring at the end of the season seemed to spark the team to greater efforts in an attempt to give the legendary captain a fitting farewell.

The first piece of good news was the first ever win in Kiel (30-32). Barça went top of their European group but a draw away to Kolding (25-25) sent them back down to second place. Meanwhile, the Asobal league was decided in the Quixote Arena, where a 23-19 victory for Ciudad Real left Barça five points behind the team from La Mancha. The league title was out of reach so Barça focussed on the Champions League while keeping up the standard in the domestic competition.

In the Kings Cup, Barça Borges travelled to Antequera as reigning champions and once again dominated the tournament. This time they faced Ademar in the final rather than Ciudad Real. Just as happened in the Asobal cup, Barça collected the prize in extra time (38-35) and Barrufet picked up the 71st trophy of his career.

With the league title all but clinched by Ciudad Real, Barça focussed on reaching the Final Four in Cologne, although they maintained a 100% record in the Asobal league for the rest of the season. They finished second in their group and the R16 draw put them up against Zagreb, one of Barça’s historic European opponents. Barça won both games to earn a quarterfinal tie against the Hungarians, Veszprem.

In the last game of the Asobal league in the Palau, against Naturhouse La Rioja, the fans paid a spontaneous tribute to David Barrufet, who made his farewell with the best Asobal crowd of the season and the stands awash with yellow. However, the climax of his final season had to come in the Final Four in Cologne.

Barça Borges brushed aside Txekhovskie Medvedi (27-34) in the semi-finals and faced Kiel, a team that they had already beaten in Germany earlier in the season. Barça dominated the game until the final ten minutes only for Kiel to stage a comeback to win 36-34. A bitter-sweet end to a career, and a season, for Barrufet and co. 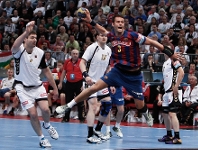