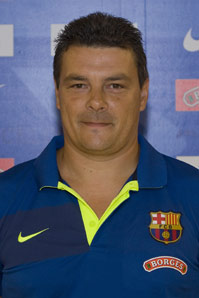 Xavi Pascual became head coach of FC Barcelona Borges on 9 February 2009, when the club relieved Manolo Cadenas of the post. After 3 ˝ years as first team assistant coach, he was now in complete charge.

Born in Barcelona on 8 March 1968, he went to Voramar school and soon started playing for FC Barcelona youth handball teams. In his playing career he was a keeper.

In 2005 he joined the FC Barcelona staff as goalkeeping coach with Xesco Espar as first team coach. The following season he also became youth team coordinator for two years. He became assistant coach to Manolo Cadenas for the first team at the start of the 2008/09 season.

As a player he made his first team debut in 1986/87, after coming up from the academy. The following season he went to Handbol Palautordera, where he stayed two seasons before coming back to Barça in 1989/91 as third choice keeper. He won the European Cup with the Catalan outfit in 1990/91. A year later he set off again around the Asobal League, spending three seasons at Teucro (1991-94) followed by three at Ademar, Guadalajara and Gáldar. After two seasons at Txapela, Xavi Pascual signed for Octavio Pilotes Posada, where he played six years before retiring.