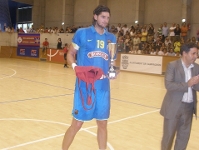 Fraikin Granollers’s experience proved too much for the young Barça Borges side in the Pyrenees league final. But with only three first team players in the squad, getting to the final was some achievement.

The Llandrius de Camprodon was the venue for the 12th edition of the Pyrenees league. FC Barcelona Borges only took three first team members, Laszlo Nagy, Eric Gull and Cristian Ugalde, because no fewer than 13 others were away in Beijing at the Olympics. Barça Borges were therefore obliged to look to the youth teams to put together a side. 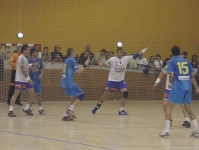 It was always going to be a big ask, but the youngsters put plenty of enthusiasm into the tournament and made it to the final, where they lost to a full-strength Granollers, 37-23.

Barça Borges reached the final after winning the first game against Toulouse 13-24 and losing to Granollers by just one goal, 15-14. Their most spectacular win was in the semi finals, where Cadenas saw his side beat mighty Montpellier 28-26, playing solid handball and with young goalkeeper Gonzalo Pérez de Vargas posting a fine performance.