February marks a before and an after 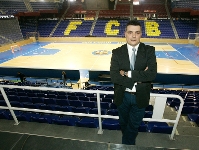 February marks a before and an after

February 8, 2008 was the turning point of the season for BarÓa Borges. Manolo Cadenas left the bench, to be replaced by the man who had been his assistant until then, Xavi Pascual.

The coach from Leon first came to Barcelona in 2007. No sooner had he taken over the side, than he had the Pyrenees league in the bag. That was the only trophy he won in his first season as first team boss. But 2008 got off to a good start with a win in the Spanish Super Cup, and the Asobal challenge started well. But losses to Portland and Ciudad Real in the League and to Kiel in the Champions league were early setbacks for an FC Barcelona Borges side that had its eyes on both titles. 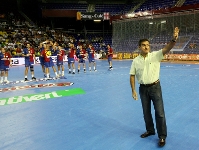 The Asobal Cup, played at the Palau, was the ideal chance for Manolo Cadenas and his side to get things back on track, but it wasn’t to be. Yet another title slipped away. The straw that broke the camel’s back seemed to come on February 7, 2008, game 16 in the league, when Pevafersa Valladolid stunned BarÓa Borges. One day later, and the club made the decision to make radical changes, and opted to terminate its contract with Cadenas. 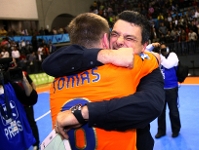 Xavi Pascual was brought in to take charge of a side that was not only struggling to get results, but was also psychologically battered. But the incoming manager got off to a winning start at the Palau against Keymare Almeria. Little by little the changes started having the right effect, with the entire training and preparation schedule being turned around, with a more competitive and self-confident BarÓa Borges being forged as a result. This was never more evident than in the Copa del Rey played in March. It was the first major honour for Pascual as a coach and also brought new strength and confidence to the side.