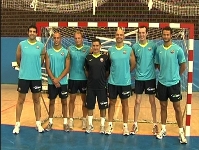 Petar Nenadic and Andrei Xepkin came in as reinforcements after the season took a break for the European Championship. Xepkin started joining in with training sessions and during the second half started turning out for the actual team as a defensive reinforcement. Nenadic, signed from Algesires, was brought in to support the centre of attack during the latter stages of the season.

Barça 2007/08 was very different to that of the previous season. With Manolo Cadenas in charge, the new project sought to consolidate a strong block of players with some renowned names in all of the key positions.

Eight new faces lined up for Barça’s handball team this year. There was also a new coach in Manolo Cadenas, who was in charge of the actions of three new arrivals from Portland (Rocas, Hvidt and Lozano), two from Valladolid (Gull and Garabaya) and Noddesbo, from Kolding, that in all represented a broad selection of some of the biggest stars of present and future on the European stage.

Kasper Hvidt
Although Barça already had Barrufet and Losert, the idea was to have three top quality stoppers in the squad. The Dane had excellent credentials. He had just ended an excellent season with Portland and would go on to do the same at Barcelona, especially with David Barrufet injured. Kasper made 245 saves, a 35% rate, in the Asobal League.

Albert Rocas
Second highest team scorer with 122 goals, Albert Rocas more than justified his transfer to Barça. With Víctor Tomás he formed a fearsome duo down the right, and also proved a terrific penalty taker. The man from Palafrugell adapted wonderfully to the team.

The Asturian pivot mainly showed his potential in defence, where he was a regular team member. Garabaya was extraordinarily regular, and being the versatile player he is, also helped out in attack, although perhaps not as much as he used for his previous clubs.

Jesper Noddesbo
The Dane was the big surprise this season. He was unknown when he came to Barça but proved to be a great offensive signing. He was the third top scorer with 117 goals, and his ability to lead counter attacks (31 goals) and effective shot-goal ratio (76%) made Noddesbo a firm guarantee on court. This may have been only his first season in the Asobal, but the player has shown that he can easily adapt to new situations.

On his return to Barça, Lozano became a regular feature of Manolo Cadenas’ plans. The left back posted some excellent performances without making a big song and dance about it, contributing solvency to the Barça team. He was the team’s sixth highest scorer with 87 goals, and was called upon by the coach in all matches.

Eric Gull
Injuries throughout the season made it hard for Gull to earn a place in the team. Tendonitis in his knee meant the year got off to a slow start and he got very few chances on court, especially given the terrific form of his fellow right back, Laszlo Nagy.