Jerome gets the bronze

Jerome Fernández won the bronze medal with France, by beating Germany 26-36 in the third place match. That was the revenge the French wanted on the Germans, who had put them out of the World Championship a year earlier on German soil.

Barça players Hvidt and Noddesbo won the European Championship in Norway after beating Croatia 24-20 in the final. The Danes got off to a losing start against the host nation, but only picked up wins from then on. 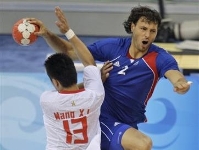 After ten days of competition, the Barça players came back from Norway knowing that all the effort had been worth it. Kasper Hvidt, Jesper Noddesbo and Jerome Fernández all came back to Barcelona with medals in their bags.

Denmark were crowned champions of Europe for the first time after beating Croatia in the final (24-20), in which the Balkan nation struggled time and again to get the ball past the imposing presence of Barça keeper Kasper Hvidt, helping the Scandinavian side to a win they had been hunting for years.

Kasper, best keeper in the championship

As well as winning the title with his country, Kasper Hvidt was named the best goalkeeper in the tournament. All in all, the Barça keeper stopped 124 of the 307 balls that came his way (40%). Kasper was already considered one of the best keepers in the Asobal, and this was the sealing of his international reputation.