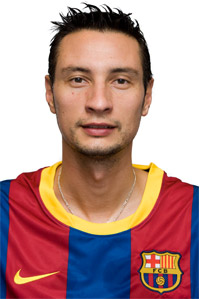 He was the latest player to join FC Barcelona Mobicat. He signed in the winter transfer window until June 2010, being an important reinforcement in defence.

He was born in Madrid on February 4, 1980. Aged 15 years he joined one of the finest clubs in the sport Interviº. Carlos played with the youth sides at the Madrid based outfit for two years, winning a Juvenil Spanish championship.

He then retained that title, but wearing the shirt of a rival Madrid club, Rayo de Mejorada. He was there for two years, first as a juvenil, and then in the Nacional A category.

At 19 years he moved up to the highest level in futsal, the Divisiµn de Honor. He did so playing for Fiat Carnicer Torrejµn, and remained on their books for seven years. Then he went on to Caja Segovia in 2006-07.

He stayed in Segovia for two and a half years, before joining FC Barcelona Mobicat as back up for the defence. “Now all of my hopes have come true”, he said on arrival. He signed his contract on November 7, 2008, but could not play for the club until the winter transfer window opened on January 1 of the following year.

He was able to make his official debut slightly earlier though, because as a member of the Federaciµn Catalana de Fºtbol he was allowed to play in the final of the Copa Catalunya. On December 30 he donned the BarÓa Mobicat shirt for the very first time.