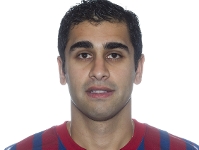 Born in Pelotas in Brazil, Gabriel played seven seasons at Inter Movistar - a team with whom he won virtually all possible titles. He brings strength and inspiration in equal parts.

Gabriel (17 November 1980) arrived in the Spanish league in the summer of 2004 from one of Brazil’s biggest clubs and signed for Barça after seven years of success at Inter Movistar with a reputation as a born winner, who never accepts defeat.

Inter Movistar has come to be known as “The Green Machine” because of the talent of players such as Daniel Ibańes, Schumacher, Marquinho and Luis Amado, but it has been Gabriel who has kept the machine turning with his strength, but also his technical skills. A fine left foot with good distribution, Gabriel was Inter’s third leading scorer last season with 10 goals.