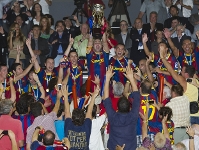 Winning the league means one other benefit for Barša Alusport, for next season for the first time they’ll be playing in the UEFA Futsal Cup. Only the winner of the LNFS gets to play in futsal’s version of the Champions League.

Barša Alusport ended a dream season with the biggest title of all, the reward for nine months of hard work, topped off with the high-pressure end-of-season play-off. The Divisiˇn de Honor trophy will be on show in the club museum for the first time ever, and epitomises the enormous effort put into this season.

The season began at Sala 10 Zaragoaa, where FC Barcelona had never won and they travelled without Igor or FernandŃo, yet came away with a big win (2-5) thatnk to a hat trick from a brilliant Wilde, while another new signing, Lin, also opened his goalscoring account with a great goal.

But there was a long way to go, and the team was still under construction, and were held to a draw at the Palau by Carnicer (3-3). Three days later, El Pozo became the first side to beat FCB this season with a 4-3 win at the Palacio de los Deportes in Murcia. 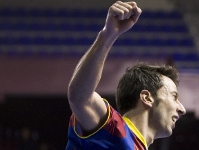 But the early doubts were overcome as the team started collecting wins, some of which were by resounding scorelines. Talavera (3-1), Guadalajara (3-8), Playas (5-1), Azkar Lugo (3-5), Marfil (8-0), the ever strong Inter (1-2) and Reale Cartagena (6-3) were all beaten by an improving Barša Alusport, Wilde continued banging in the goals, including four st Gestesa, and not even the many injuries could stop them. The win over Inter put Barcelona back on top of the league table for the first time in 3 years and 32 days.

An unlucky loss at Triman Navarra (4-3) ended the winning streak, but despite losing the top spot and then only drawing at Benicarlˇ (2-2) and losing to Manacor (2-1), the team stayed calm and made amends in the second half of the season.

The cup title in Segovia was a boost for the Barša Alusport morale, and they won the next six games. The most famous was against El Pozo in front of a packed Palau (6-1, and 5,724 spectators). The fans were really starting to get behind this team.

Despite an unexpected slip at home to Azkar Lugo (1-3, ending a run of more than a month and a half unbeaten in the league), Barša were still on course for the regular season championship. An incredible win at Cartagena (4-4) put them back on top and they then won their five remaining games to hold onto that sport and ensure home court advantage throughout the play-offs.

What a real team is all about 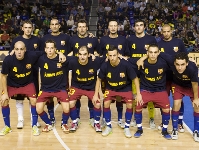 The Copa del Rey title in Toledo mau have been wonderful, but left the team with injury concerns. Nevertheless, last year’s runner-up Triman Navarra were the opposition in the best-of-three quarter final, and game one was at the ever-tough Universitario de Pamplona. But Barša Alusport were looking like champion material, and dealt with the road game handsomely (1-3).

They then finished the job in game two at the Palau (4-2) to win the series 2-0, and then did likewise in their semi final against another tough opponent: Lobelle Santiago. They came from behind to win at the Fontes do Sar (4-7) and as the injured players started returing, they made light work of game two to qualify for the final (5-0).

But the hardest part had yet to come. A young and talented Caja Segovia awaited in the final, having eliminated Inter Movistar and Benicarlˇ en route. Barša Alusport had to produce their very best in this best-of-five title decider.

The Castilians stunned the Palau by winning game one to overcome Barcelona’s home court advantage (2-3) and almost won game two as well (4-2). Then Barcelona were majestic on their first visit to the Pedro Delgado (1-4). Game five was at home, but they would have preferred to finish the job in game four. That wasn’t to be, and Caja Segovia won to set things up for a fifth and final match (4-2). Sunday June 26 will be a date to remember at the Palau Blaugrana, when the biggest ever futsal crowd in the pavilion assembled to see Barcelona clinch the title with a hard-worked but thoroughly deserved win (3-2, to crown a remarkable season.