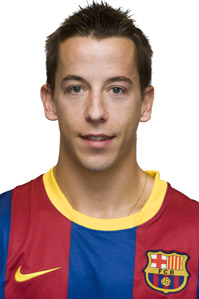 Angel Velasco – known by his sports name of “Lin” - joins Barēa with the reputation of being one of the most promising players in the Honour Division. He’s an all-round flank, electric in attack and hardworking in defence.

Lin, 24, has became one of the outstanding players in the league and, though his name is still not that well-known to the wider public, he is sure to thrill the fans in the Palau. His pace and ability to move the ball in the transition from defence to attack made him a key player for Segovia, where he played for the last five seasons. He’s signed for Barēa until the 2013-14 season.

Lin made his Honour Division debut at the age of 18 with Boomerang Interviś, now Inter Movistar, where he played for a year on loan. He won the league and the Intercontinental, though he was very much on the fringes of the Madrid based squad. However, back with Segovia, his performances went from strength to strength and he has become one of the stars of the competition.

He’s a Spanish international and last season played 27 matches (13 in the starting line-up), scoring 12 goals. Goals are not his speciality but he makes a good contribution, especially at the second post and on the counterattack.

Rival defences shouldn’t be fooled by his boyish appearance - Angel Velasco is pure electricity, moves past his marker with ease and is very fast. In defence he is very hardworking.