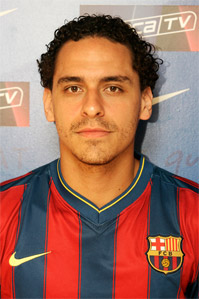 He stared playing futsal as young as four years old, even when he was on his own. He loved the game, as he did basketball, the other of his great passions.

He found it easy to progress in the sport, especially thanks to the huge support he got from his mother. Aged 18 he finally became a full-time professional when he pulled on the Flamengo shirt and decided to concentrate on the indoor game rather than the 11-a-side version. It proved to be the right decision, and after just one year at Flamengo, he was snapped up by Vasco de Gama and won the Rio championship, before moving on to Sao Paulo, where he spent two more seasons before coming to Europe. His European adventure began at Benfica, before eventually signing for FC Barcelona last season.

He immediately became a regular part of the first team, although he has had a hard time with injuries. He has suffered injuries to his right knee on two occasions, although that has not meant he has not developed into an essential member of the squad. He has gone on to become a full international for Brazil and was part of the team that won promotion to the top flight in the Canary Islands in 2005-06.