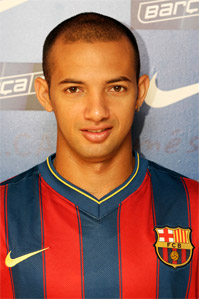 Igor is the youngest player in the squad. Despite his young age, however, he has already gained experience at the highest level which he will now bring to the FC Barcelona Senseit team.

Igor was born in Fortaleza, Brazil on August 2, 1984. At just 23 he has already tasted life at the highest level in futsal, that began during his early years playing in Brazil. He played for Sumou Caera and then for Sao Mguel from Iguaça. His next port of call was Caja Segovia in Spain, where he spent two seasons.

The pivot signed for Barça Senseit in the summer of 2007 and is set to bring youth and exhuberance to the forward line. Igor revealed his desire to succeed at the club as he stated: "I want to enjoy myself as much as I can here at a club with such a good structure. I also want to enjoy winning trophies with this team."

Despite his youth, Igor has shown an incredible amount of potential. In one-on-one situations is he very strong and has shown great balance and technique. He also has great anticipation.