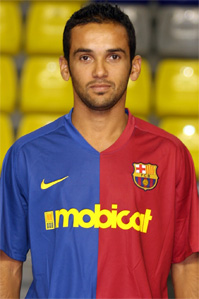 The Brazilian, known as PC, joined Barça Senseit at the start of the 2007-08 campaign after spending five seasons playing for Martorell and one for Azkar Lugo. He is considered to be a key signing to bolster the defence.

Luiz Claudio Costa, known as PC, was born in Rio de Janeiro on August 18, 1974. He began his professionla career with Ruso Preto where he spent two seasons before moving on to join Internacional de Porto Alegre. He was to win the league and the Intercontinental Cup before opting to sign for Ulbra and then Flamengo ahead of a move to the Spanish league.

At the start of the 2001-02 campaign he signed for Martorell and spent five seasons at the club, helping them to win the Copa Catalunya on four occasions and reached the semi finals of the Spanish league and the Copa de Espańa on two occasions. Before joining Barça Senseit he spent last term playing for Azkar Lugo.

To play for the Blaugrana has always been a dream for PC and now it has become reality he is delighted. "I have come here feeling like a young kid again," he said. "For a Brazilian, it is a dream to play for Barça. It is a gift."

PC is regarded as one of the best defensive players in the world. He has a great deal of experience and winning spirit. Not only is he an influential player on the court, but also off it as well as he is renowned for his leadership skills. He brings order at the back and organises the team in defence. Going forward he is not well known for scoring goals, but his incredible vision and intelligence means that he can create momentum. He reads the game well and makes playing look easy.