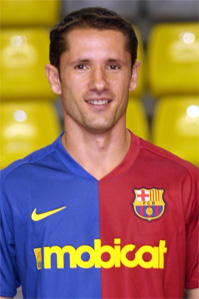 Justo Cásceres has won two league titles and the European Cup on three occasions. The winger is accustomed to winning trophies and believes that he continue to do that now that he has joined Barça Senseit.

Justo Cáceres began his career in his hometown team, CLM Talavera. He spent four seasons at the club before opting to join on to Playas de Castellón at the start of the 2000-01 campaign. Two years later he was on the move again as he signed for DKV Seguros Zaragoza, where he played until the end of last term.

With two league titles and three European Cups among his honours, the Toledo-born winger is used to winning trophies. Despite that, he believes that the most important moment of his career came when he was offered, and accepted, the chance to join Barça Senseit. "At every club I have lived through some great experiences," he said. "To come to Barça, on a personal level, is the most important thing that I have achieved. I have joined a football club that is building a very strong team for the future."

He is Barça first left-sided player for many years and can play in several attacking positions. Cáceres is a complete player and is very strong when tracking back to defend too. He is strong on the ball and has an eye for goal and always gives everything when he plays.