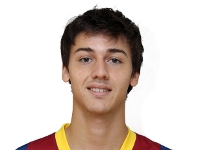 Riverola is a true product of the Barça youth system as he joined the club when he was six and has risen through every rank since then to reach the B team. After starting out playing up front as a striker he has since dropped back and made himself into and outstanding midfielder while retaining his eye for goal.  Riverola plays on loan with Vitesse until the end of the season 2010/11.