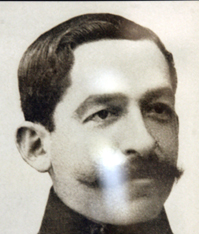 Military man Joaquim Peris de Vargas was one of the most controversial characters in the entire history of the club.

He first joined the board in 1910 as vice president, a role he would hold under several different presidents. Following the resignation of Ŕlvar Presta in September 1914, Peris de Vargas became caretaker president of Futbol Club Barcelona. His presidency was marred by constant controversies, as he always insisted on imposing his own criteria, which even led to his own players rising against him. Peris de Vargas was dictatorial in his ways, and once even went as far to say “Barcelona is me”. He only left the club when the Captain General of Catalonia, seeing that during his temporary presidency the situation at the club has become unbearable, obliged him to resign at the end of the 1914-1915 season.