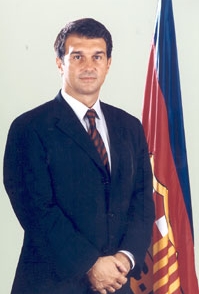 A new generation of young, dynamic directors came into the Club with Laporta and generated a real shake-up of the Club. They popularized the expression “virtuous circle”, which aimed to strengthen the Club economically and socially and prepare the ground for a winning team that would nurture the social dimension of the Club. With this concept as their starting point, the Board initiated a campaign to recruit new members called “The Great Challenge”, at the same time proposing to eradicate violent groups from the Camp Nou. Alongside this a number of other innovative measures were set up, such as holding Board meetings in different parts of Catalonia while reinforcing communication with the fans through the revitalization of the Barca magazine and a determined drive to promote the Club’s TV station, which took the name of Barca TV.
In addition, the Foundation embarked on a new phase, characterized by a change of orientation and became the social identity par excellence of FC Barcelona, the heart and soul of the Club, with more ambitious objectives and new action programmes. During Laporta’s mandate, the values which had traditionally characterized Barca were strengthened: Catalan identity, public-spiritedness, solidarity and universality.

In footballing terms, the first season, with Frank Rijkaard as manager, saw the incorporation of the Brazilian international Ronaldinho, who raised enormous expectations. The team improved match by match and finished as runners up in the league. The following season, 2004-2005, featured the signings of Eto’o and Deco, key elements in winning the league title for the first time in six years. The expectations raised by that team were confirmed the following season when, as well as renewing their league title, they also won the Champions League in Paris against Arsenal, the second European Cup in the Club’s history.

Despite such a successful record, which made the president extremely popular, the law courts ruled that the first ten days of his mandate, from 20th to 30th June 2003, were equivalent to a whole season, which forced the Board to call elections in September 2006, at a moment of maximum popularity having achieved two league titles and the Champions League. Laporta stood for re-election and received the signatures of 8,994 members backing his candidacy. He was the only candidate to reach the minimum number and was therefore automatically re-elected.

The 2006-2007 season started with the signing of the agreement with UNICEF, in which the Club committed itself to collaborate economically and in addition wear the UNICEF logo on the shirts of the football team. This was an unprecedented move designed to strengthen the strategy of converting Barca into ‘more than a club’ throughout the world. On a sporting level, the season witnessed a winding down of previous success; despite winning the Spanish Super Cup, the elimination from the Kings Cup at the hands of Getafe and the loss of the league in the final matches created a mood of despondency, which the Board tried to mitigate with the signing of Henry, followed shortly after by Toure Yaya and Abidal.

In the 2007-08 season, the Club celebrated the 50th anniversary of the Camp Nou and set up an international competition for the remodelling of the stadium. This was won by the British architect Norman Foster. At the same time the Club was one of the promoters of the European Clubs Association (ECA), presided by Karl-Heinz Rummenigge, and of which Joan Laporta became vice-president. Meanwhile, the season was more disappointing than the previous one and it was soon clear that the team wasn’t working as it should. Rijkaard’s time had come to an end. Reluctantly, Laporta had to sack him. Ronaldinho, the player who had symbolized the return of hope in 2003, also left.


In June 2008, Josep Guardiola was appointed first team manager. The year before he had taken over the reserve side, Barcelona B, when they were on the verge of promotion to Second Division B. However, the season was ending in a mood of disappointment and a group of members put forward a vote of censure against the Board of Directors. They obtained enough support to force the vote on 6th July 2008. 39,389 members voted and 60.6% voted in favour of the vote of censure, a figure below that of 66.6% required by the statutes to force the resignation of the president. After this result, eight directors left the Board but president Laporta replaced them and continued in office and was ratified by the representative assembly in August.

After this complex interlude, the most brilliant season in the history of the club began. The football first team achieved success in every competition in which they took part, with some memorable matches such as the 2-6 win in the Santiago Bernabeu. The team won the Kings Cup, then the league and finally the Champions League against Manchester United in Rome, the third European Cup in the Club’s history. At the beginning of the next season, this list of titles was extended to include the Spanish Super Cup, the European Super Cup and the World Club Cup, making this Barca the team of the Six Cups. The World Club Cup won in Abu Dhabi against Estudiantes de la Plata (2-1) was the only competition never won before by the Club. President Laporta was then able to round off his mandate with another league title in the 2009-10 season.

In short, in Joan Laporta’s seven years as president, the football team won the World Club Cup, two European Cups, the European Super Cup, four league titles, the Kings Cup, three Spanish Super Cups and three Copes Catalunya. In the economic and social areas, the figures speak for themselves. The annual budget increased from 170 to 445,5 million euros and the membership rose from 106,135 to 173,701.