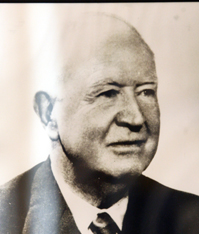 Arthur Witty (1878-1969), a member of an important English family residing in Barcelona at the time, came to Fútbol Club Barcelona shortly after it had been founded.

On September 17, 1903, he became president after having been a member of the board under Terradas.

During his period in charge of the club, Witty promoted a series of local youngsters to the first team, including Comamala, Hornos, Quirante and Soler, something which did not go down too well among some of the members. On the pitch, Espanyol were so dominant that Witty, in his time as president, was only able to celebrate one Catalan Championship. Don Arturo, as he was known, also had to face the challenge of yet another change of ground, and the club started playing its home games on a pitch in Carrer Muntaner.

Under Witty, Barça played its first international match in Barcelona against Stade Olympique of Toulouse and on May 1, 1904 the team travelled abroad for the first time to play the same side, Toulouse, in Languedoc. Witty brought the first regulation size balls back from England and it was also him who introduced goal nets. As a player, he defended the Barça colours on 74 occasions between 1899 and 1905.

After he had run FC Barcelona for 746 days, the club members, of which there were now as many as 234, were sorry to see Arthur Witty stand down as president on October 6, 1905.