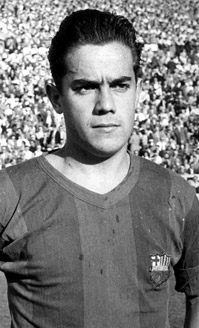 Considered one of the great masters of Spanish football, Luis Suárez (la Coruńa, 1935) was one of the stars of the Barça side of the late fifties, but sadly his greatest and most successful period came when he was no longer a Barça player.

The ‘Golden Galician’ was signed from Deportivo de la Coruńa as an inside left. He had everything you could want of a footballer: amazing skill, an amazing talent for moving the ball about with his feet, great vision and a tremendous shot. But he was mainly noted for his elegant style, it was often said he was such a graceful player that he could have played in a dinner jacket. 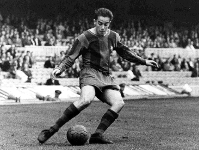 Barça and then manager Helenio Herrera (1958-60) had a lot to do with the way this Galician midfielder burst onto the scene, while he was always in the media eye and the Barça supporters were divided between those that favoured him (suaristas) and those that preferred Kubala (kubalistas), although the actual players were extremely good friends.

In 1961, just after he had won the Golden Ball, the club fell upon hard financial times and had no option but to cash in on their star player and sell him to Inter Milan for 25 million pesetas. It was un unfortunate time for this to happen, five days before the tragedy of the European Cup Final in Basle, where Barça lost to Benfica. No longer part of FC Barcelona, Suarez went on to enjoy huge success in Italy, where he won two European Cups and a host of other major titles.