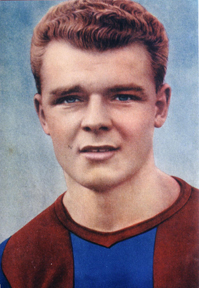 A mythical figure of Barcelonismo (Budapest, Hungary, 1927 – Barcelona 2002), Kubala signed for FC Barcelona in June 1950, when he arrived with a team of refugee players from an Easter country called Hungary.

He had to go through a lot of bureaucracy before making his debut in April 1951. However, it was not long before he became idolised by the Barcelona faithful.

With Kubala came a golden age at the club. Kubala displayed his skills in the middle of the pitch, where his style of play also highlighted his: Phenomenal physique, technical ability, extraordinary vision of play and by the fact he was a free kick maestro and a leader on pitch. 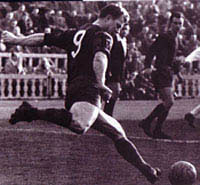 With him, the team won absolutely everything there was to win in the 1951-52 season. In the years following, he was unable to repeat his form fully, however, this was due to the injuries he received from opposing defences (and the leniency from he referees). In any case, by the end of the decade he was able to flourish again under the coaching of Helenio Herrera. He retired in 1961, but returned a few months later and continued to 1963. In 1980 he took control of the team as coach, however, success was not achieved.

1993 saw an emotional homage paid to Kubala in the stadium in Montjuďc. He died in Barcelona on the 17th May 2002. In 2003 he was given the gold medal of merit in recognition of the work he carried out.