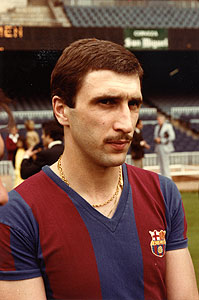 Krankl (Vienna, Austria, 1953) wrote his name in the Barça history books by proving to be one of the best strikers and also one of the most adored players by the fans to have appeared for the club.

After joining from Rapid Vienna, where he won the Golden Boot in 1977/78, he spent two seasons at Camp Nou, but that was enough time for him to leave his mark. In the 78/79 campaign he netted 29 goals in 30 matches to claim the Pichichi honour and went on to hit 64 goals in 88 games overall. 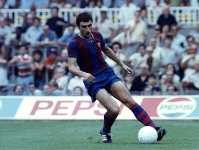 Krankl was an archetypal centre forward who was always in the right place and took advantage of nearly every chance that came his way. His famous left foot could produce an incredible shot. In his first year with Barça he produced some memorable displays and scored a variety of goals.

In May 1979 he was offered the support of the fans after he was involved in a traffic accident that saw his wife badly injured, but fortunately she survived and recovered. A few days later he helped the club to win the European Cup Winners' Cup in Basel. Krankl thanked everyone and admitted that he identified with Catalunya as if he was a Catalan.