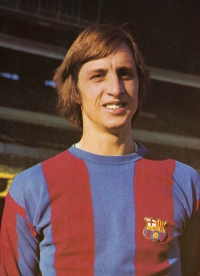 Cruyff (Amsterdam, Holland, 1947) is one of the best players in the world of all time and in his time, he was considered number 1.

His immense quality saw him win worldwide recognition and he won the Golden ball award three times (1971, 1973 and 1974).

‘The flack’ signed for FC Barcelona in August 1973 following lengthy negotiations with his former club Ajax. In his first season, Cruyff exploded onto the scene; using his technical brilliance and intelligence to help Barça win the league in 1973-74 – the first time in 14 years. 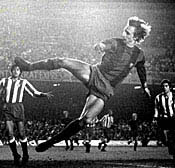 In the eyes of the fans, they will always remember many images of the goal he scored against Athletico Madrid in Camp Nou and the famous 0-5 victory over Madrid in the Bernabeu in 1974, which will go down in history. Unfortunately his level dropped in the following seasons and Barça only won the King’s cup in 1977-78. Cruyff left the club in 1978.

In 1988, he returned to the club as coach and put into motion the best era in the history of the club: winning 4 league titles among other and winning the European cup for the first time at Wembley in 1992 with the ‘Dream Team’. Cruyff then left the club in 1996.

In 1999 he was chosen as best player of the century in Europe and in September 2006 he was awarded the cross of Saint Jordi from the Government of Catalonia.