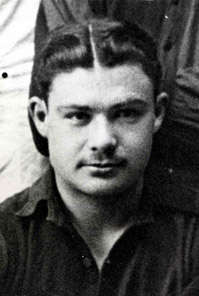 Carles Comamala (Madrid, 1887 – Barcelona, 1976) was a personal friend of Gamper’s and the real successor to the Swiss player in the Barça attack when the club founder retired in 1903. Comamala was an extraordinarily prolific goalscorer.

With a father from the Canaries and a Basque mother, but born in Madrid and brought up in Catalonia, he was not only a great striker, but also a unique character, who stayed in the sport until a ripe old age and then went on to become a club director from 1909 to 1911, and founded new clubs in Irish, Galeno and Universitario, as well as enjoying rugby and swimming and journalism. He was also the president of the Catalan Gymnastics Federation and a renowned sports doctor.

And if all that was not enough, he was also the designer of the FC Barcelona club crest when he won a public competition held in 1910.