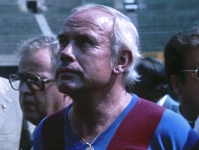 He arrived at Barcelona Football Club after a triumphant time managing Borussia Moenchengladbach.

With the German team he won the UEFA Cup in the 1974-75 season, however, in Barcelona things did not work out for him as well as they had done in his own country. He had an added problem while at Barça: Johan Cruyff. The Dutch player never accepted this manager's working methods, an attitude which caused a rift amongst the supporters. The majority, obviously, supported the 'Flying Dutchman' and, as a consequence, Weissweiler ended up leaving the Club through the back door.