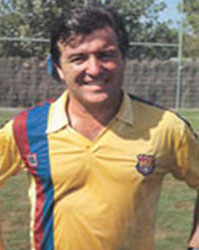 Terry Venables came to Barcelona Football Club with the difficult task of replacing ‘Skinny' Menotti, a manager who, despite not winning any important trophies with the team, had created an attractive and colourful style of football.

The post-Maradona era was about to start. Venables was recommended by Bobby Robson, a good friend of the President and who himself, years later, would take over the team in the season that Ronaldo was here (1996-97). Terry used a very English system, a classic 4-4-2, which took advantage of outstanding defenders like Gerado, Migueli and Julio Alberto and a very hard-working midfield led by the superb German, Bernd Schuster. 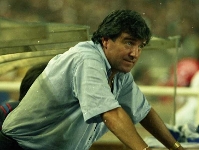 Venables won the League Championship in his first season and the following year took the team to that cursed final in Seville, the European Cup final of 1986. As well as this, he won the League Cup in the 1985-86 season.

In his last season, 1986-87, things did not go so well for him and he was replaced by Luis Aragonés, who managed the team until the end of the season.