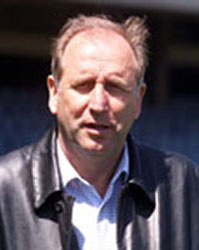 “The Boy from Pedralbes” hung up his boots in 1979, but immediately returned to the world of football, taking charge of Futbol Club Barcelona's youth team.

Although he was a great player, Rexach spent his best years on the Barcelona bench, first accompanying Luis Aragonés (1987-1988) and later Johan Cruyff (1988-1996). With the first, who he substituted for certain games, he won the Spanish Cup against Real Sociedad of San Sebastian (1-0), and with Johan he won a seemingly endless list of titles, the most important being four consecutive leagues and the precious European Cup. He also took full control of the team when the Dutchman was so unfortunately forced into absence for a heart operation. Of the many fine memories that Rexach gave Barcelona's fans when he managed the team, the greatest of all was the 0-6 win in Bilbao, a game in which the Blaugrana totally humiliated Javier Clemente's men. Later on, on 1996, under completely different circumstances, Rexach substituted Cruyff after he had been sacked.

Towards the end of the 2000-2001 season, Charly once again took charge of the first team when the directors decided to substitute the manager who had started the season, Llorenç Serra Ferrer. That year, he led the team into the following season's Champions League, when the club defeated Valencia in the final league game of the season thanks to a spectacular last minute goal from Rivaldo. The next season, 2001-2002, Carles Rexach once again led the team to one of the top four places in the league and was on the verge of qualifying the side for the Champions League Final, but they were knocked out at the semi final stage by Real Madrid.

At the beginning of Louis Van Gaal's second period in charge at the club (2002-03), Carles Rexach was demoted from his position at the helm of the first team and became the club's technical secretary.