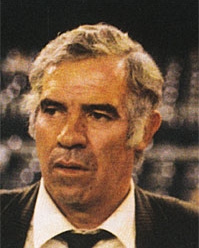 This globetrotter of Spanish football, better known as “el Sabio de Hortaleza” (the wise man from Hortaleza) has coached different team all over Spain.

Born in Hortaleza (Madrid) on 28th June 1938, Aragonés has coached the largest number of First Division matches. Luis Aragonés made his debut as a coach in the 74-75 season. He started out with the team he had starred in, Atlético de Madrid.

He entered Barcelona Football Club as a substitute for Terry Venables and succeeded in winning the Cup. His arrival coincided with one of the most delicate moments the Club has ever been through. Most of the players had joined ranks and had demanded that the president Josep Lluís Núńez resign, in the famous 'Motín de Hesperia' (Hesperia Mutiny) and Luis Aragonés gave them his unconditional support. Apart from this important event, Luis Aragonés, whose second coach was Charly Rexach, was unable to finish the season with the team owing to a depression.

Afterwards, he continued his career as a coach in other clubs such as Betis, Valencia, Espanyol, Mallorca and Atlético de Madrid.