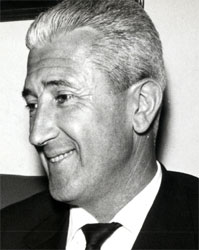 Brocic did not spend even one whole season on the Barcelona Football Club bench. He arrived at the beginning of the 60-61 season and signed up some important players such as Jesús Garay, Salvador Sadurní and Josep Maria Fusté.

The season looked promising because Barça won absolutely all of the friendly matches it played against other European teams. Even when the League began, Barcelona Football Club won the first four matches but little by little, it fell into a deep crisis and the results made the team the disgrace in the First Division.

On 12th January 1961, after drawing 2-2 to Athletic Bilbao in the Camp Nou, Brocic was dismissed and the second trainer, Oriazola took over coaching the first team.