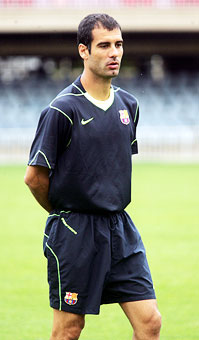 Josep Guardiola i Sala was born in Santpedor on 18 January 1971.

After a highly successful career as a Barça player and then gaining promotion as manager of Barça Atlčtic, he won all six titles on offer in his first year in charge of the first team.

Josep Guardiola, one of the most important players in Barcelona’s history, took over as first team manager on 17 June 2008 after a brilliant season as coach of Barça Atlčtic with whom he won promotion to Second Division B. “I can’t promise you silverware, but I can say that we’ll keep on battling to the end and you’ll be proud of us,” he said on the day of his first Gamper Trophy. And he was right.

The fifteenth Catalan manager in the history of the club arrived with the mission to end a two-season long trophy drought. To do that he used the same 4-3-3 system he had experienced as a Barça player and which had brought him success at Barça Atlčtic.

Guardiola only understands one way of playing football which is to attack, keep possession and move the ball around so that the other team has to run after it. That’s the way his Barça side plays, as did his Barça Atlčtic, and they have had more possession and more shots on goal than virtually every team they have played. He appreciates the talent of his players but he puts hard work and individual sacrifice for the common cause first. He sees football as a squad sport in which he has ultimate responsibility for results and is therefore also the leader of the squad.

Josep Guardiola is a meticulous manager who sees to the tiniest of details. He gets ready for every game with videos of the opposition and never thinks beyond the next match. He is a brilliant motivator who brings the best out of each player in his squad. This philosophy of football led to his success as first team boss, when the team had their bets year in the history of the club winning the Spanish League and Cup double, the Champions League , both the European and Spanish Super Cups and the World Club Cup in the year of the six titles.

This excellent campaign means that Guardiola is now the third manager after Cruyff and Samitier to pick up the League title after having won it as a player at Barça. He has also become the sixth man to win the Champions League as a manager having previously done so as a player, and the first manager to win the treble in the 21st century and the first ever to win six titles in a single year.

In the 2009/10 season, Guardiola’s second in charge, the Liga title was won for the second year in a row, and the twentieth on club history, setting a new record of 99 points in the process. The title was not decided until the very last day, with a game against Valladolid, and the celebrations went ahead that very same evening in the company of the fans at the Camp Nou.

Before going into management, Guardiola was a class footballer who played almost all his career at FC Barcelona before going on to spells in Italy, Qatar and Mexico. He was at the Catalan club from when he joined its youth academy in 1984 until he left for Italy.

In Italy’s Serie A he made his debut with Brescia in the 2001-02 season, followed by a year with Roma before going back to Lombardy. Later on he went further afield to Al-Ahly in Qatar for two seasons (2003-04 and 2004-05) and Dorados de Sinaloa (Mexico), where he hung up his boots for the final time in 2006.