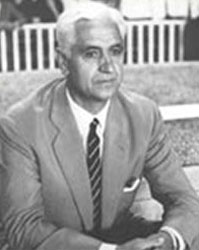 He came to Barcelona Football Club together with his brother-in-law, Kubala. He coached the team from 1950 to 1954.

The beginning of his period with the team was difficult and some of his decisions were rather unfortunate. However, when Kubala began to play, his luck changed radically. Barça turned into a football-making machine.

His contract with the Club ended in the 53-54 season when, after clashing with some of the team players, he left the Club via the back door.